Joe Russo’s Almost Dead started putting their playful, ferocious spin on the Grateful Dead canon on January 26, 2013, when Joe, Marco, Tom, Scott, and Dave first came together to play the iconic songbook at Brooklyn Bowl. Brooklyn Bowl quickly became the band’s home base, providing unmatched energy both on and off the stage.

This week, we’re showcasing The Eleven: a Joe Russo’s Almost Dead pay per view broadcast featuring their 2017 6-night run at Brooklyn Bowl from October 2017. This run featured insane special guest appearances, including Stuart Bogie on October 7, Katie Jacoby on October 12, and an unparalleled sit in with John Mayer on October 13, celebrating the band’s 125th show! For the next 2 weeks, relive the electrifying shows on FANS at 11:11 PM ET on April 23, 24, 25, and April 30, May 1, and 2. Can’t catch the streams “live”? No sweat! Watch the shows when it’s convenient for you with 72-hour replay or have your own JRAD marathon on Sunday, April 26, or May 3!

Pre-order now for individual shows, or get 15% off when you buy the 6-night bundle. A portion of the proceeds will benefit Brooklyn Bowl’s Staff Relief Fund.

Find out more on the following link: https://fans.com/#streams 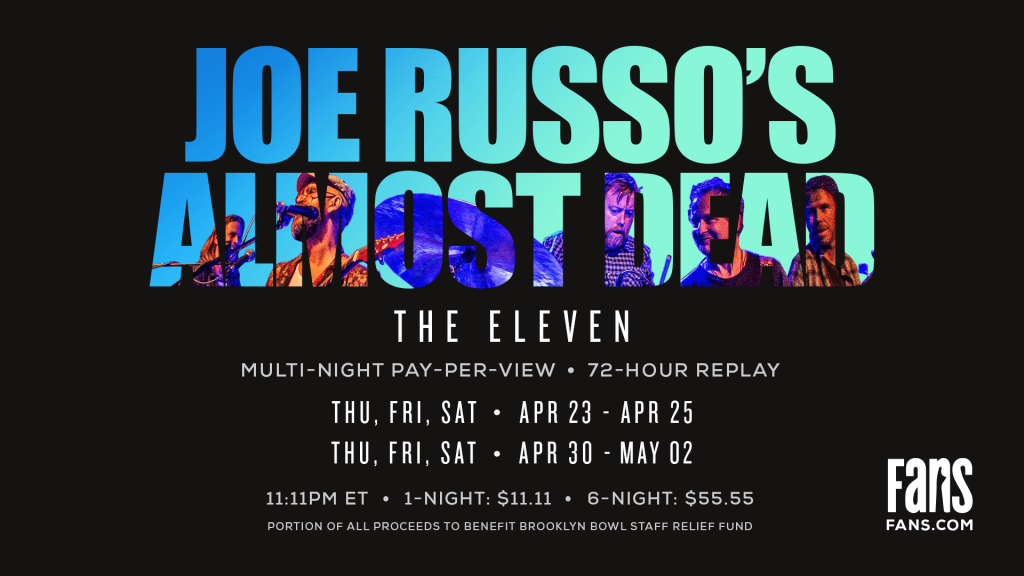