Considered one of Britain’s greatest guitarists and the epitome of the modern-day wandering bluesman, John Fairhurst, will be providing the world with a much-needed injection of entertainment through a LIVE 90-minute gig titled ‘The Medicine Show’ from his home, in Britain, on Saturday, 2nd May 2020.

“As musicians, this moment in time has presented a challenge for us, which is to jump into the virtual world and bring the music live and directly to our fans,” says John.

“On stage, he attacks, pile-driving riffs, fingers flashing, picking frenzy then Nirvana steel sheet screams with shot glasses of Black Sabbath and occasional sparks of Moroccan sand dune music. Moods, Tastes, and flavors ebb and flow then mesmerize, His medicine is the blues and his message is to pay attention.”

John Fairhurst is normally a traveling musician, playing hundreds of shows a year both big and small in order to make a living. This crisis has stopped all that in its tracks and our remedy is to bring you The Medicine Show”

John has teamed up with live streaming pioneers SkyroomLive to present a high-quality pay per view show because as the saying goes the show must go on.

Tickets for the show are available on http://www.skyroomlive.com/johnfairhurst.html

Musicians, venues, and indeed the entire industry is really suffering as a result of Covid 19. As such we pledge to give 10% of the profits from The Medicine Show to trusts and charities supporting the grassroots of the industry, at the level support is needed most.

SkyRoomLive.com is the venue and John’s place the stage. John has a high-quality audiovisual studio set up at home and Skyroomlive has over 8 years’ experience in bringing live events directly to fans online across the world.

Get ready for 90 minutes of music from one of nature’s sons! 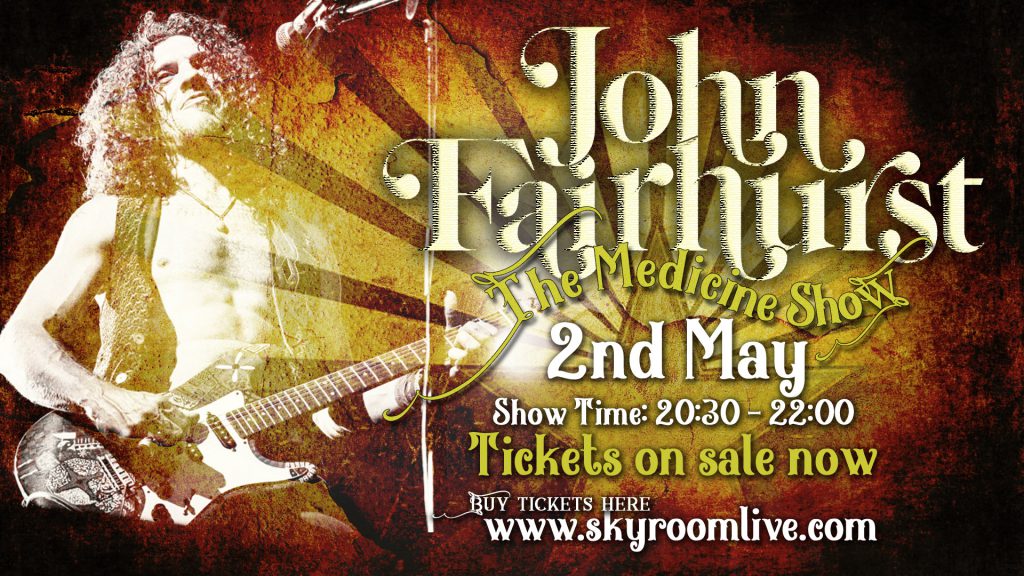