There is a good reason that Blues Hall of Fame Inductees, Kal David and Lauri Bono sell out every year at Blue Frog Studios. They are just THAT GOOD.

Kal David got his early start in Chicago in a band with Peter Cetera of CHICAGO, moving on as lead guitarist/vocalist with “JOHN MAYALL & THE BLUESBREAKERS”, then years with “JOHNNY RIVERS” and “ETTA JAMES”. Whether it was laying down tracks or opening for, BB KING, being on stage with JOHN LENNON, jamming with the ALLMAN BROTHERS, Kal is recognized as a true legend in the blues.

Then there is Lauri Bono. What an amazing talent! As Bruce Maier of Damn Good Tunes so eloquently stated “She is one of the most dynamic and amazing female vocalists I’ve heard in decades!… Lauri sings in a way that she can sound like soft velvet or turn on the gravel and guts – raising the old goosebumps on your arm…” Lauri had a stint with BETTE MIDDLER as a Harlette. Then along with Kal, sang background vocals for several years with “ETTA JAMES” and “JOHNNY RIVERS”. She has done background vocals with a host of greats and as a lead singer, she is unparalleled.
Kal and Lauri are bringing up their full band from California including Ric Ulsky-Hammond B-3 organ, Nat Scott-drums, vocals as well as local bass great Rob Marr.

The NUMBER ONE request at Blue Frog is “WHEN IS KAL DAVID & LAURI BONO COMING BACK?” Kal and Lauri only make their sojourn to Vancouver once a year, so don’t miss out on this special occasion. September 21st, 9.15 PM PST! Order your Live Stream on the following link: https://www.bluefrogstudios.ca/live-streams.html 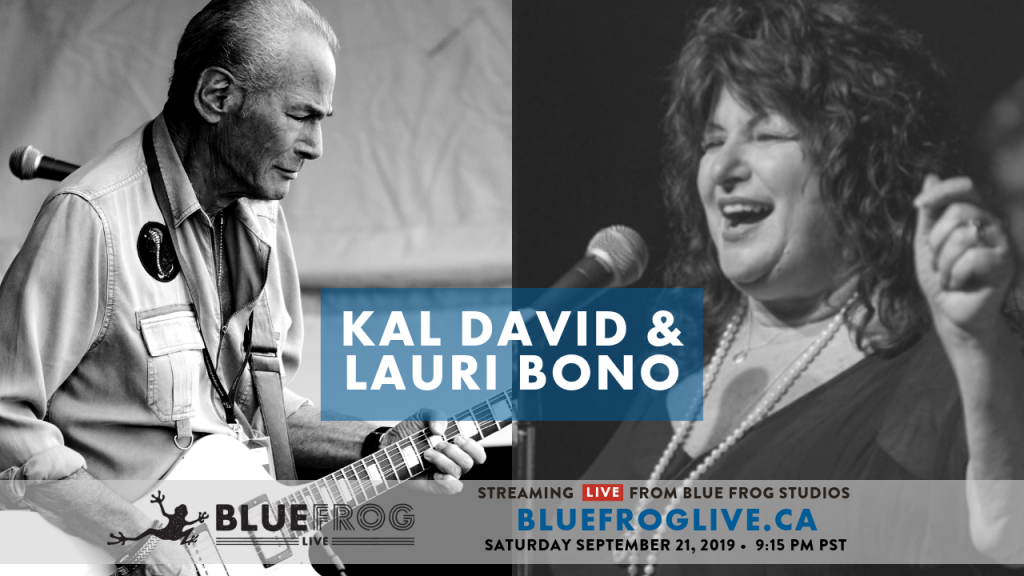