Formed in 1967, Chicago Transit Authority recorded their first album in 1968 before shortening their name to Chicago. Their famous self-description as simply “a rock and roll band with horns” simplified what was actually a remarkable fusion of classical, jazz, R & B and pop music.

The only musical act to name each album with a successive number starting with Chicago 3, (Chicago Transit Authority was #1, Chicago was #2). Chicago has sold over 100 million of them and remains to this day within the Top Ten of all artists of all time in terms of album sales. In 1971 Chicago became the first contemporary musical act to sell-out Carnegie Hall for an entire week. In the US alone, Chicago has been honored with 23 gold, 18 platinum, and 8 multi-platinum albums.

The band was inducted into the Rock and Roll Hall of Fame in 2016. Among their 21 Top-Ten singles are Questions 67 & 68, Beginnings, Make Me Smile, 25 or 6 to 4, Does Anybody Really Know What Time It Is?, I’m a Man, Saturday in the Park, Dialogue, Feelin’ Stronger Everyday, If You Leave Me Now, Hard to Say I’m Sorry to name a few.

WEST COAST CHICAGO is a group of musicians who share a mutual admiration of Chicago. The band was formed under the leadership of Paul Clarke inspired by Greg Farrugia. Paul’s in-depth knowledge of virtually every last detail of Chicago is encyclopedic. He knows who wrote what, who produced what, who replaced who, and every musical detail. Each player is dedicated to recreating the sound, energy, and intensity of each and every song, and between-song groupings, Paul enthusiastically recounts interesting facts and trivia that make West Coast Chicago interesting and informative as well as hugely entertaining.

Don’t miss their amazing show on January 18th at 7 PM PST only on: https://www.bluefrogstudios.ca/live-streams.html 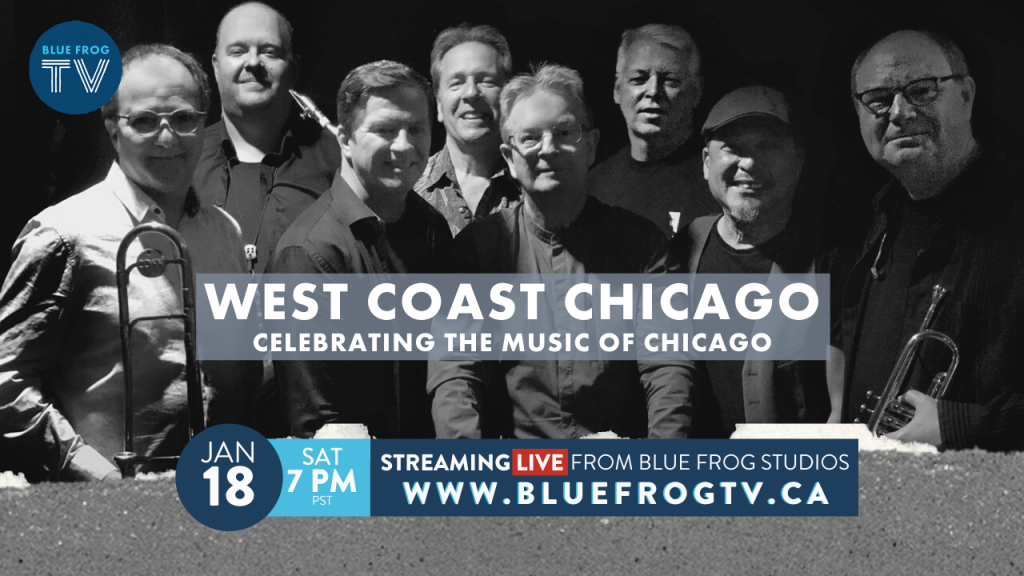